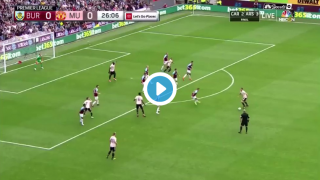 The game thus far has been extremely direct with United having the vast majority of chances on goal. David de Gea has looked to lump the ball forward as opposed to playing from the back and it’s no wonder why they’re trying to get the ball to Lukaku each time.

United’s opener came from a beautiful cross by Alexis Sanchez, who found Lukaku’s head inside the box before heading the ball past former Manchester City goalkeeper Joe Hart.

Manager Jose Mourinho knows a win today is important to get our season back on track after just one win from three games. That’s hardly the sort of form that will threaten Manchester City or even Liverpool, with both rivals showing top form early on this season.

Hopefully, the Reds can grab another before half-time and take real advantage of this struggling Burnley side.