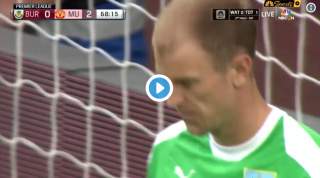 The pressure is on Paul Pogba to replicate his form from the World Cup in a Manchester United shirt, but having a penalty saved by Burnley goalkeeper Joe Hart was a shock to the system.

Thankfully, United were already two goals to the lead but Pogba, our penalty keeper, could have put the game to bed if he converted his spot kick.

Personally, I’d put it down to a great save rather than a poor penalty kick, though questions will be asked whether Romelu Lukaku should have had a chance to complete his hat-trick.

Moments later, Marcus Rashford, who just came on as a substitute was sent off for throwing his head at a Burnley player.

The Manchester United's midfielder misses from the penalty spot. 🚫

Why didn't they give it to Lukaku is the question?? 😐 pic.twitter.com/F20Wadh2Ye

A stupid move and the referee’s decision is not something we can complain about. You cannot go around throwing your head towards fellow footballers and expect to get away with it.

Rashford expects more game time but that’s a funny way to prove yourself to the manager.