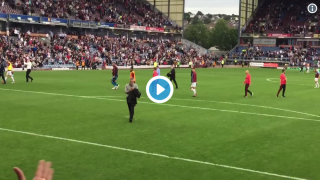 ‘Mourinho’s Red Army’ the fans sung as Jose Mourinho walked towards the away end at Turf Moor after Manchester United beat Burnley 2-0 in a rather dominating affair.

United have been at the end of harsh criticism of late, with some members of the media adding to the pressure Mourinho is currently under to deliver at Old Trafford.

A failed summer of transfers set the manager up for a challenging season but, hopefully, the convincing win over Burnley will get the lads back on track for when they return from the international break.

In some ways, the imminent international break has come at a right time for United. It gives the manager and players time to reflect on issues facing the Reds, with the view of fixing things before the Premier League resumes again.

However, Mourinho shared another moment with the fans after the full-time whistle. Jumping over the sponsor boards, he entered the supportive crowd of fans and handed over his jacket as a gesture of thanks for the support.

The fans also showed their support for Mourinho and the players by protesting against the club’s executive vice-chairman, Ed Woodward, with a plane banner prior to kick-off on Sunday.

Watch the video of Mourinho and the fans below.