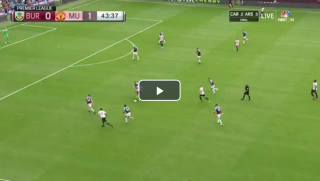 Romelu Lukaku has scored a first half brace against Burnley on the brink of half-time.

Manchester United have dominated in every area of the pitch and manager Jose Mourinho would have probably been disappointed to have gone in just one goal ahead.

Mourinho’s celebration after the goal would suggest the Portuguese tactician is delighted with his team’s performance, though Burnley have yet to really get going. The Clarets’ have played with a below par energy level and boss Sean Dyche ought to demand more from his players in the second half.

Burnley have allowed the Reds dictate all areas of the pitch and that showed when the second goal went in.

Luke Shaw and Jesse Lingard were trying to work their way into the Burnley box before a deflected effort landed in Lukaku’s path. The Belgian then hammered the ball home past Joe Hart for the second time in the first half.

In the second half, it would be great to see United push on and try bolster our goal difference for the Premier League standings. The players could also do with a lift which would come with a big win.