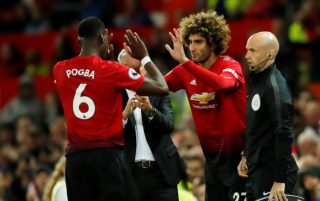 Manchester United’s team selection this afternoon has not gone down well with these fans.

The Reds face Burnley at Turf Moor in the Premier League and Andreas Pereira has failed yet again to make the bench after being substituted at half-time two weeks ago against Brighton & Hove Albion.

United have gone with a midfield three of Paul Pogba, Nemanja Matic and Marouane Fellaini – and it’s the latter that seems to be causing most distress among fans on Twitter at the moment.

We badly need to get our season on track with a win over Burnley today after Monday night’s disappointing 3-0 defeat to Spurs.

Jose Mourinho, however, has arguably gone for a defensive-minded midfield by picking Fellaini over the likes of Pereira or Ander Herrera.

Here is how some fans reacted to the news on Twitter.

Smalling & Fellaini. My football club is a joke. https://t.co/yEfkuKroQQ

Fellaini and Matic midfield is a very small mood

Where is the creation in Manchester United midfield. Such an expensively built squad with so many meh players

When Jose is in trouble the first man he calls up is Fellaini. These are the actions of a man who has no idea of how to play football if it doesn’t involve pinging a ball to a big guy’s head. He’s done out here.