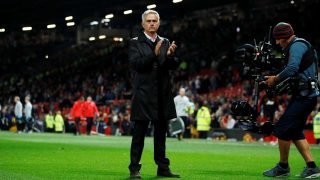 Manchester United are under pressure to get results starting with Burnley after consecutive defeats against Brighton & Hove Albion and Tottenham Hotspur.

Manager Jose Mourinho must now aim to restore the Reds as title challengers, even if looks like a distant expectation at this moment in time.

Burnley are without victory in the league, leaving them in 18th after three games.

READ MORE: MUFC Podcast: Pogba plays like he doesn’t want to be at Man Utd

United fans will be calling for a response from their players after watching them stumble to a 3-2 defeat versus Brighton, followed by a 3-0 hammering by Spurs at Old Trafford.

Burnley is usually a difficult trip, but their recent form would suggest we’re facing them at the right time. Sean Dyche’s side is also involved in the UEFA Europa League, therefore, it is expected that their thin squad will be stretched.

The Clarets have yet to win in the league this term, losing 3-1 to Watford and 4-2 on the road at Fulham.

Mourinho will hope his players can exploit Burnley’s defence, but that has also been an area of concern for the United manager. At the other end of the pitch, an array of chances were squandered against Spurs, including an open goal for Romelu Lukaku.

While the players are partly to blame for our slow start this season, so are Mourinho’s tactics which have been criticised by some fans since last year. Many of the team’s flair players have struggled to buy into Mourinho’s way, which has been something of a trend at his previous clubs too.

Burnley’s lack of threat going forward should aid Mourinho in getting a win and, hopefully, our season back on track. Another defeat for the Reds could see Mourinho’s spell at United come to an end and, despite it never being an ideal time to replace a manager, this could shape our season miserably.

Perhaps one of the biggest battles to expect is Aaron Lennon on the right coming up against an in-form Luke Shaw, who was tremendous against Spurs on Monday night, even earning a call-up to Gareth Southgate’s England squad. Equally interesting will be James Tarkowski trying to handle Lukaku.