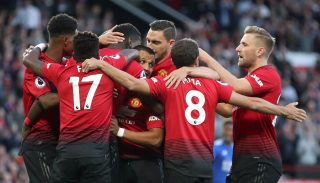 Martin Keown has revealed the moment he told Arsenal to seal the transfer of Luke Shaw – back when he was a teenager coming through at Southampton.

The Manchester United left-back is enjoying a fine run of form at the moment, looking one of the club’s most improved players this season despite the team making a woeful start overall.

However, this was the form Shaw previously showed before breaking his leg in 2015, against PSV Eindhoven. It seems as though he’s finally put that horrific injury behind him.

Keown has been impressed by how Shaw has played as he’s made his way back into the England team with a call-up for the next round of international fixtures. He has been a long-term admirer of the 23-year-old defender.

In a Q&A with the Daily Mail, the former Arsenal defender said: “I first watched him as a 16-year-old playing on a training pitch for Southampton against Reading. In the first 10 seconds, he whipped a ball across the box with such power and precision that I just thought, ‘Wow.’

“I was standing next to an Arsenal scout and I immediately said, ‘You’ve got to sign him.’”

Arsenal came up short when it came to signing Shaw and we didn’t see a repeat of the Aaron Ramsey scenario.

It wasn’t long ago that Shaw’s future was in real doubt at United. He wasn’t kicking on and there were people within the club questioning his behaviour and determination to become a better player.

Mourinho was not convinced but that view may be about to change if Shaw can continue these high levels of performance.