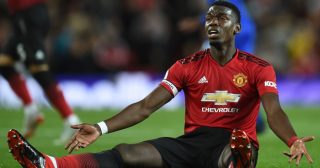 Manchester United need a win this weekend to try put our season back on track. We are already six points off the pace, with Liverpool and Tottenham Hotspur both on perfect runs since the 2018-19 Premier League season began.

Burnley have had a difficult start to the season too, losing all games and sat looking over their shoulders in 18th. Can it get any worse? Yes, it can.

Still, though, Mourinho’s men ought to respect Burnley. Sean Dyche’s teams are usually well-drilled and difficult to break down.

This has been an area of concern for years but it pushes away from the spotlight when David de Gea is at his best. After a poor World Cup with Spain, De Gea has looked short on confidence but he will keep his place and battle through this below par spell. In front of him, Mourinho needs to find a centre-back pairing and stick with it for consecutive weeks. I’ve gone for Eric Bailly and Chris Smalling — supported by Luke Shaw and Antonio Valencia on the flanks.

Paul Pogba is likely to start. The World Cup winner should be United’s main player, driving us forward in times of need, but instead, he looks like someone that wants to be elsewhere. That alone sends the wrong message to every player in the dressing, that a player can behave in such a way that undermines the manager. The Frenchman will be partnered by new signing Fred and Nemanja Matic.

Although the defeat to Tottenham was hard to take, Jesse Lingard was one of the better players on the pitch. He worked tirelessly to press their defence and forced them into mistakes. It was just misfortunate that Romelu Lukaku and the rest were unable to take their chances. That must change against Burnley, with Lukaku finding the back of the net and Alexis Sanchez replicating the form he showed on the pre-season tour.

Check out the Full Time DEVILS match preview, which I happened to feature on to give my take on things ahead of the game.