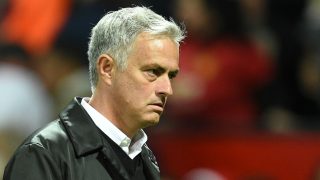 Odds have been slashed on former Chelsea manager Antonio Conte replacing Jose Mourinho at Manchester United, just as he did at Stamford Bridge two years ago.

The Italian tactician was brought in at Chelsea in the summer of 2016, taking over after Guus Hiddink had taken the job in a caretaker role for a few months after Mourinho’s exit.

It seems there may now be a chance of history repeating itself over at Old Trafford as Mourinho’s future looks more uncertain than ever.

READ MORE: Martial’s contract U-turn at Man Utd may be down to Zidane’s reported personal intervention

United have lost two of their three opening league games and look in disarray after a difficult summer in the transfer market, in which they only captured one addition to improve the starting line-up imminently.

Conte did a good job at Chelsea, winning the Premier League title in his first season with much of the same side that finished 10th the year before after a disastrous first half of the campaign under Mourinho.

Then it all toured sour for the 49-year-old in his second season with the Blues, but he remains highly thought of within English football. Working under Roman Abramovich is never going to be easy, but the next United manager will have to deal with the Glazer family and the club’s executive vice-chairman Ed Woodward, which, in many ways, could be considered even more toxic.

According to football.london, Paddy Power have slashed odds on Conte joining the Reds from 14/1 to 5/1, making him their second favourite for the position now.

Whilst Mourinho remains manager, we’ll be backing him but it’s interesting to take note of the bookmakers’ markets.