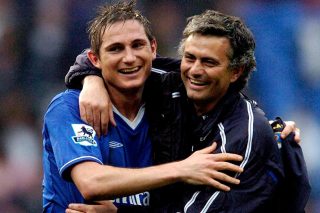 Manchester United will face Derby County at Old Trafford in the third round of the Carabao Cup. The tie sees Reds manager Jose Mourinho come up against Frank Lampard who he previously managed in his two successful spells at Chelsea.

The favourable home draw will come as a relief to under pressure Mourinho, who saw Chelsea get a tough draw away to high-flying Liverpool. However, Frank Lampard’s Derby have had a solid start to their Championship campaign, currently 6th in the table.

Mourinho shares a good relationship with Lampard, who won three Premier League titles under the Portuguese boss in their time together at Chelsea.

“At Chelsea, in my first period, I had Frank Lampard, probably the best player in the Premier League for one decade”, Mourinho previously said of the English midfielder. Now Lampard will get the chance to test his managerial skills against his previous mentor in what will be an interesting battle between the two Chelsea legends.

The tie will take place on the week commencing 24th September, in between United’s Premier League games against Wolves and West Ham.

United were involved in two draws today: Champions League and Carabao Cup. Both draws will satisfy fans as it could have been a lot worse.