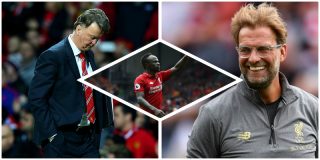 Liverpool star Sadio Mane has given his brutal reason for rejecting a move to Manchester United while he was still at Southampton.

The Senegal international, who has gone on to become a major player in Jurgen Klopp’s side, says he held talks with Louis van Gaal over joining United but decided against the move.

When explaining his reasons for doing so, Mane described Manchester United as the wrong club for him, which is sure to please Liverpool fans.

READ MORE: Mourinho is fighting a battle at Man Utd he simply will not win

Mane doesn’t give any additional information on that, but he ended up making the move to Anfield not so long afterwards.

The 26-year-old fits Klopp’s team perfectly and he’s improved as a player since working with the German boss.

In discussing his talks with former United manager, Van Gaal, Mane hints he also felt the Dutchman was the wrong coach for him, and it’s hard to argue with his decision given the number of attacking players that suffered from his style of football.

‘Some teams wanted me – Manchester [United] – the wrong team wanted me,’ he told the Premier League Today show, as quoted by the Metro.

While I somewhat agree with Mane’s point of view, Van Gaal actually changed his mind on pursuing the former Saints ace before Liverpool even showed interest, so he wasn’t to know Klopp would come knocking.

Moreover, Van Gaal made a similar decision on former Hoffenheim playmaker Roberto Firmino, who would also go on to join Liverpool.

Caught Offside makes the argument that Van Gaal would have been the wrong coach for Mane to blossom as a player.