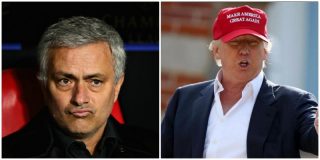 Nobody could fault the effort of Manchester United’s players on Monday night, or indeed the system put in place by the manager. United pressed high and hard, as they should continue to do so. Equally, however, nobody could dispute Tottenham were deserving of their comfortable 3-0 by full time. Even in their best spells in the first half an hour, United were chaotic and excitable during an entertainingly scrappy first half in which both teams struggled to string five passes together.

United, were considerably better than their pathetic, meek surrender in Brighton but that is the greatest concern of all. The team played better than they had in the previous two matches. Yet still, they were deservedly beaten by a far superior Spurs.

READ MORE: Liverpool ace explains why Man Utd was the wrong team for him

Mourinho, being Mourinho, made damn well sure what the story was though; Mourinho.

His post-match interview was baffling enough. Claiming a tactical and stylistic victory wholly contradicts his own mantra of winning above all else. It was the post-match presser that made all the headlines though. It was a tutorial in sheer antagonism. The press pushing Mourinho’s buttons – although the questions were fair – and Mourinho responding with a mass of contradictions, railing against the media and above all else doing what he does best: Absolving himself of blame entirely.

His final flourish, outlining how many league titles he has won, (the same as “specialist in failure” Arsene Wenger) was essentially telling everyone that he is great and everyone else is s**t.

It is a move symptomatic of the man’s worst traits. His narcissism, stubbornness and manipulation. His managerial powers may be waning but his ability to build a cult of personality have not at all. There is no groundswell of movement among the fans against Mourinho, in part because most of us recognize how awful the owners are. Nevertheless, his toxic machismo will always appeal to many football fans who think modern footballers are all soft and see media conspiracies everywhere

Mourinho has seen that and, like the orange f***wit squatting atop his slimy throne across the pond, has played his crowd like a fiddle. Criticism of the manager is now equated to holding an anti-United agenda if you spend more than five minutes foraging through the hellscape of social media. The politics he plays are as good as ever, unfortunately,he no longer has the media onside to stroke his ego and do his bidding.

The harsh reality for Jose, is the sheer volume of people he has pissed off, disrespected and bullied on the way up, his descent would inevitably be brutal and unedifying.

Hampered by inept, scheming executives with no direction and struggling to reconcile with a shift in mindset in the game, Mourinho has lashed out at everyone he sees as beneath him: Other managers, the media and his own players. Players he has recruited and failed to improve.

Mourinho and United will not be ending this increasingly doomed marriage anytime soon. For Shelly and his parasitic paymasters, The G*****s, he offers an effective s**t-shield. With Mourinho gone, all the flak is sent in their direction because those sponsorship deals won’t please anyone but the club accountant.

Nevertheless, football’s Donald Trump, has been declining for some time and increasingly set himself up as some sort of antagonistic demagogue more concerned with settling scores than winning trophies. When he last departed Chelsea in December 2015, they were 16th, amid a relegation battle. Virtually the same squad went on to win the title just a season later.

Mourinho is no longer the managerial great he was. Like everyone else, he has been beaten by the passage of time and his appointment to the United job was folly from the start. Everyone bed into the trenches though, like all good sociopaths, Mourinho will not approach the exit door quietly. It will be loud, messy and likely (hopefully) take several other leading players down with him.