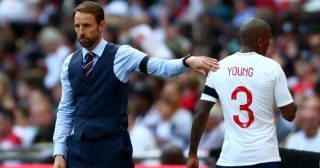 Gareth Southgate has lifted the lid on his decision to select Luke Shaw over Ashley Young in his 23-man squad for England’s UEFA Nations League campaign.

The Three Lions host Spain at Wembley on September 8 before facing Switzerland at the King Power Stadium just three days later and Southgate has made several changes to the squad that travelled to the 2018 World Cup in Russia.

While 18 of the 23 players who finished fourth at the World Cup have maintained their places, Young, Gary Cahill, Jamie Vardy, Phil Jones and Nick Pope have been left out.

READ MORE: Mourinho is fighting a battle at Man Utd he simply will not win

Shaw, who last played for England in March 2017, replaces fellow United teammate Young, while Joe Gomez and Adam Lallana come in for Cahill and Vardy.

Asked about explaining his decision to Young, Cahill and Vardy, Southgate said, as per The Metro: ‘I’ve had discussions with them around their involvement and what we’d be looking to do in the next few months in particular.

‘Those guys are older and – in a couple of their cases – aren’t playing much with us.

‘I recognise that, when you’re travelling with England and not playing for a fair bit of time, that’s a different sort of role. I did that myself for a few years.

‘There’s a point where I don’t need to know what those guys can do as we’re looking to bring younger players through.

‘It was great that we were able to have mature conversations about that.’

Southgate believes that Shaw has returned to his best after returning from a double leg fracture and starting in every United match so far this season. On Monday night, for instance, he was our best player against Tottenham.

‘He has had a difficult period in terms of adapting to a new club. A really horrendous injury he had to overcome,’ Southgate said.

‘I’m really impressed with the physical condition that he is in.

‘He had an extra edge to his game in the last couple of matches I’ve seen. He’s shown an aggression to his play, a desire not to lose. Back to his powerful best.’