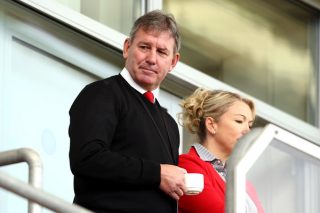 Bryan Robson has called for Jose Mourinho to be given time to sort things out at Manchester United.

Mourinho’s position at Old Trafford has come under scrutiny after he oversaw United’s worst Premier League start since 1992-93 – a year we were crowned Premier League champions – with Monday’s 3-0 defeat to Tottenham condemning United to their second loss in their first three league games.

But Captain Marvel has dismissed suggestions that Mourinho should be sacked and has urged supporters to get behind the manager during this difficult period for the team.

“It’s too easy,” he told MUTV. “The minority of fans in clubs will be asking for the manager’s head after a few bad results and it’s often they speak the loudest.

“The track record that Jose has holds up. After three games, you don’t talk about sacking the manager, you encourage and back him.”

The 3-0 loss to Spurs was the biggest home defeat of Mourinho’s managerial career, and he has conceded that he did not know his best defensive line-up. Three years into his reign as United boss, that’s inexcusable but this is a man who wanted to strengthen his defence in the summer, only to be restricted by the club’s executive vice-chairman Ed Woodward.

Robson was left concerned by the United manager’s comments in his fiery post-match press conference, which saw Mourinho storm out after demanding ‘respect’ from journalists.

The United legend believes the key to United’s recovery lies with the establishment of a defensive partnership.

“What I’d like to see is Jose picking two centre-halves he trusts and see them for a run of games,” Robson added.

“We need two defenders who know each other properly. Like Rio Ferdinand and Nemanja Vidic and others, but the centre-halves have also always been in the team.

“It would be nice to see that for a run of games and get clean sheets.”