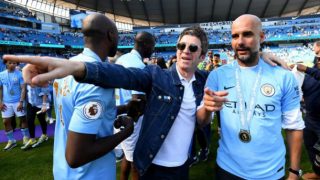 Noel Gallagher claims Manchester United are “unravelling” just like Liverpool did in the 90s.

The former Oasis member thinks that his beloved Manchester City look even stronger this season – days after drawing with newly promoted Wolves – and says that any side that beats them will have to conjure up a “perfect season”.

Perhaps he’s right on that note but Liverpool, as much as I hate to admit it, look like they could push City the closest. Gallagher also compared Liverpool fans to the Queen Mother.

“Liverpool fans are a bit weird – they get over-emotional,” Gallagher told TalkSport. “They’re like the Queen Mother, they think everybody loves them. They’re kind of a little bit deluded.

“I’ve got three Liverpool fans in my band, and it’s great watching the meltdown, round about March – particularly when it’s in a Champions League final.

“We were on stage while it was on and I could see the Liverpool fans dying as the gig went on.

“I must say, after they smashed up our team coach in the quarter-final, I derived as much pleasure from that as I did from winning the league!”

Of course, NG isn’t going to give an interview on football without showing his hatred for United.

“He [Jose Mourinho] seems to be sinking at the minute and if he’s asking the press to give him more respect, that’s the start of the unravelling,” he added.

“When I was growing up Liverpool were the best team, in the 80s, and you couldn’t envisage them going 20 years without winning the league.

“And in the 90s when United were winning the Champions League, Trebles and Doubles, you couldn’t envisage them going ten minutes without winning the league.

“But it does happen. Since Ferguson left United – which was a great day for British football – it’s all beginning to unravel.

“I’m just going to sit back and watch it with great pleasure.

“The fan of the Premier League wants every team to be strong so teams keep taking points off each other and it keeps going until the last day of the season like when we first won it in 11/12.

“The die-hard City fan in me wants the club to go out of business tomorrow, so you struggle with it a little bit.”

If only the Gallagher brothers could put their obsession with United aside, man up and reform fuckin’ Oasis.

“As a City fan, I want United go out of business tomorrow!”#ManCity fan @NoelGallagher showed no sympathy for #MUFC or Jose Mourinho when he joined talkSPORT this morning! 😂