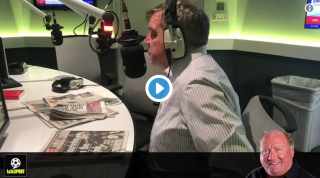 Sam Allardyce has launched a passionate defence of Jose Mourinho following Manchester United’s 3-0 defeat to Tottenham – saying Spurs were outplayed by the Reds.

The pressure on Mourinho has ramped up a few gears on Monday night as his side suffered a defeat which handed him the worst ever start to a season in his managerial career. Whereas United have been here before, losing two of their first three games in the 1992-93 season, when they went on to become Premier League champions.

However, before the Old Trafford clash, Mourinho had never lost two of three opening games, but a shock defeat to Brighton and now Spurs has put his future under the spotlight more than ever.

United ended the first half on top but could not turn their superiority into goals. We were wasteful and Romelu Lukaku can have no excuse for his open goal miss, which would have set the tone for United to get a win over Spurs.

But while many have pointed the finger of blame towards the Portuguese following the dreadful result, Allardyce has backed the boss and insists his side were merely the victims of a ‘freak result.’

“I’ll tell you the stats and why Man United were so GOOD,” Allardyce said on Tuesday’s Alan Brazil Sports Breakfast.

“United had 57 per cent possession, 23 shots at goal and five on target.

“Tottenham had 43 per cent possession, nine shots on goals and five on target.

“It’s only about Tottenham’s finishing that got them the victory – normally that result would never happen.

“So is it a freak result? When you’ve had 23 shots at your own place and you have not scored, that is not the manager’s fault. But the manager always gets blamed at the end of the day.

“Mourinho has set his team up to attack, they’ve created enough chances and opportunities to win the game comfortably, they failed to take those chances and they ended up being sucker punched by some pretty poor defending.

“But if you’re a manager, you’d be saying to your players: ‘Cut the silly mistakes out, keep getting this possession rate and shot rate, and we will win far more games than we’ll lose’.

“All the hysteria around the result because it’s 3-0 – nobody is looking at the real facts!

“The facts are, United did create more than Tottenham, they did outplay Tottenham, but unfortunately they missed their chances and their slack defending and some brilliant finishing from Tottenham was the difference.”

Big Sam also went on to joke about putting money on himself to takeover at Old Trafford, with odds currently at 100/1.

Would Sam Allardyce be a success at #MUFC? 🤔 pic.twitter.com/3RpJXco618