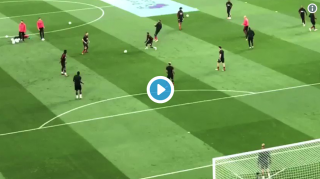 Jose Mourinho’s side produced a decent performance in the first half and could consider themselves unlucky not to be ahead after Romelu Lukaku’s open goal miss when he took the ball around Spurs goalkeeper Hugo Lloris.

Danny Rose scuffed his back-pass to Lloris which Lukaku latched on to.

READ MORE: Sam Allardyce jokes about putting £1 on himself at 100/1 to takeover at Man Utd

He rounded the French shot-stopped and was left with an open goal on his right foot.

However, Lukaku somehow sent his effort wide when a goal at that moment (16 minutes in) would have set a different tone for United.

It proved costly as Mauricio Pochettino’s side romped to a 3-0 victory after a Lucas Moura brace and Harry Kane’s header.

But the open goal wasn’t Lukaku’s first embarrassing miss of the night. A video of the striker during the warm-up before the clash with Spurs has emerged for all the wrong reasons.

Lukaku was taking part in finishing practice before kick-off and had been set up for a shot on the edge of the box. The result is akin to his own goal opportunity.

See the clip below.

If you’re thinking that Lukaku had a bad half, you should have seen him training before the game… #MANTOT pic.twitter.com/kbOX16A4zu