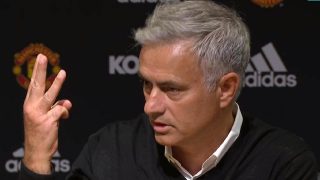 United suffered a 3-0 defeat to Spurs on Monday and it will be Mourinho who will get the brunt of it this week.

The Reds lost just two games at Old Trafford last year and seemingly managed to re-install some of the fear factors that Sir Alex Ferguson is credited for bringing to the ground during his trophy-laden tenure at the club.

However, this team is nowhere near as good as some of the side’s Ferguson built and I’m not talking about personnel. This side lacks chemistry and it rarely looks balanced enough to carry out an attack and be able to defend immediately if possession is lost, a bit like a child’s bike without stabilisers.

Under Mourinho’s stewardship, United have developed a more conservative approach, which I happen to believe is caused by the team’s poor defence. Mourinho feels numbered support from midfield and other areas is required to act as a shield for this unconvincing defence. That showed last night when we set out to attack from the start.

But it appears that now time might have finally run out for Mourinho after Monday night’s result. According to Sky Sports pundit Gary Neville, the United boss now has a mountain to climb to turn things around and he even suggests that he doesn’t know his best starting XI.

As The Daily Mail reports, he told Sky Sports post-match: “This is the biggest challenge Jose Mourinho has faced.

“He has got to come out of it because I have to say I look at the squad and the team and I’m not sure what the best XI is.

“The buck stops with the manager, it always does and it has to. At the moment there doesn’t look to be a balanced outfit there at all.”

The former defender’s comments will likely back up what a lot of supporters are thinking this morning. I jokingly said at the weekend, with United v Spurs taking place on a Monday night, at least Mourinho’s men couldn’t ruin our weekend.

Now the week is ruined.