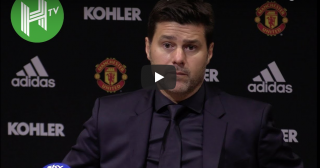 Mauricio Pochettino has hailed Jose Mourinho as “one of the greatest managers in the history of football.”

Tottenham Hotspur ran rampant on Monday night at Old Trafford with a 3-0 win over Manchester United.

It goes without saying that the Portuguese manager is now under severe pressure following back-to-back defeats.

Last week, the Reds dropped three points away to Brighton & Hove Albion in a 3-2 defeat. That means from the opening three games of the new Premier League season, we’ve got just three points from one win over Leicester City on an opening day.

After recording his first win at Old Trafford, Mauricio Pochettino has defended his opposite number. The Argentine spoke about how the United boss was a big ‘inspiration’ for him when starting his career as a coach.

Pochettino said, as per Hayters TV:

“Of course I respect him, one of the greatest managers in the history of football.

“He was very inspirational to me, I have only a few managers, like Marcelo Bielsa and Mou who inspired me when I started my career.

“We have a job that is so difficult and of course, I have great admiration for him.”