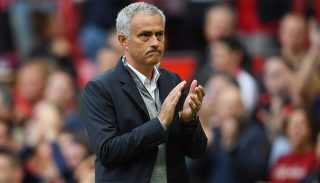 As the third goal nestled to the left of David de Gea’s goal for Spurs last night, that sense of dejection yet for the first time, confusion set in. This time it felt different to other times we’d lost. How were we three goals down to a team we had outplayed for most of the first half?

Mourinho had been ballsy and dropped players he felt weren’t giving their all for the team and had let us down in the previous fixture against Brighton. This game we set up exactly how the supporters had wanted and the tactics Mourinho deployed looked to be working with some of the fastest football fans had seen United play in over six years.

Yet as the referee blew for full-time, United had lost, again. There are a number of issues quite evident at Manchester United currently, some more obvious than others. There is this elephant in the room that keeps stampeding back in every time we lose a game, therefore I thought it’d be best if I listed out some of the issues below.

Firstly, it’s obvious from various interviews and briefs that the board headed up by Ed Woodward didn’t back Jose Mourinho in the window. Mourinho, who is notorious for being well prepared with targets, handed the board a list of players he wanted, however, United only managed to secure one. That being Fred, who so far has looked a good addition but will obviously require some time to adjust to the English league and life in Manchester.

The Fred signing took it’s time too, something again Mourinho not being used to, with him well known for getting business done early to ensure of some time for bedding in of new recruits. This would’ve irked him. On the flip-side, Woodward would have entered the window cautiously to ensure United aren’t being ripped off for players, with greedy agents and clubs demanding top whack for their best talents. However, as the great Sir Alex once said, there is no value in the market and if you want the best, unfortunately, you have to pay the ransom.

Moreover, as the well-known saying goes “the best form of attack is defence”, with this quote never sounding more apt in this current situation United find themselves in. The team are crying out for one maybe two new centre-backs which seems to be the most pressing issue. United have always played with one “brutish” defender and one more “ball-playing” defender to sit alongside them when you think back to the likes of Nemanja Vidic who put his everything on-the-line. Whereas Rio Ferdinand was a more composed defender and was always ice-cool at the back. It was a recipe for success. The team are currently really missing that stability.

United are currently playing with second-rate centre-backs who were at fault for at least two of the goals yesterday, with one of our defensive targets even having a stormer of a game in Alderweireld. This didn’t help matters and further pushed home United’s inadequacies at the back, making both Woodward and the board look red-faced.

The club is lacking in a number of areas, but the board must start putting their money where their mouth is when they backed Mourinho by agreeing on a new contract with him back in January. As Sky Sports and Ex-Manchester United player and legend, Gary Neville said after the defeat to Brighton, “you can’t half build a house.” United have to back the manager fully as the time to sack Mourinho was back in January. This means signing the players the manager has asked for and not undermining him in the background.

Manchester United are the most successful sporting brand in the world. This is a great stat for the conscience of the owners and investors, however, has little to no substance if the sporting matters aren’t prioritised over the commercial matters. United have everything from a music sponsor to a global mattress and pillow partner. These revenues alongside TV rights and the like have valued the club at $4.12BN, topping the charts with the nearest club being Real Madrid. Whilst the commercial side of the club is of course extremely important, it’s also vital for the club pay as close if not more attention to the sporting side which has been relatively neglected. The day the Board put sporting decisions before commercial decisions, will be the day Manchester United is reborn and until this shift of attitude changes right at the top, the club will struggle to compete with the elite.

Furthermore, there is this notion that the grass is often greener on the other side. With some fans and supporters calling for the managers head and for the board to bring in someone to evoke change which will miraculously fix the issues that pre-date the Moyes era. It’s like some supporters have a perverse enjoyment of the unknown and the limbo of who the board would select to replace Mourinho. United have had two permanent managers since Ferguson, three if you count Ryan Giggs who was in temporary charge after Moyes. We’re now onto our fourth coach in Jose Mourinho who is one of the most successful managers to ever grace this planet. He has been honoured with the World’s Best Coach award four times at separate clubs, has won two Champions League trophies, three Premier Leagues, one English FA Cup, Four English League Cups, three Spanish Championships, three Spanish Cups, two Spanish Super Cups, two Italian Champion Cups, one Italian Cup, one Italian Super Cup, two times UEFA Cups and many others. He is one of the most decorated and well-respected coaches, yet there are still calls for his head.

We live in the “now” society, where people need instant gratification and results immediately. Unfortunately, the issues at United run so deep, it’s going to take some time until the various situations resolve themselves. Chopping and changing the manager constantly won’t fix the underlying problems and although it may suit the likes of Woodward and others on the Board in order to deflect the attention from the real issues at the top, this hiring and firing course of action isn’t the instant fix.

Moreover, United must move with the times and restructure the hierarchy to ensure a modern-day look, with the hiring of a Director of Football high up on the list of things to do. This role encompasses many facets, from dealing with transfers to be the liaison between coach and the Board. The club still operates an old management structure which is evidently broken and “old-hat.” This shakeup must happen sooner rather than later to ensure the club don’t move any further behind.

In the meantime, we as fans must back the team and manager, give them our full support in every game whether at home or away and be the twelfth man. The club needs to get on and fix the issues at the top and back the manager. Finally, the players need to take some responsibility, put more hours on the training field and less on their social media platforms. That way, we’ll move forward united.