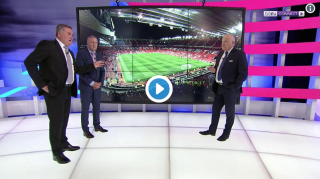 Like everyone’s conversation when this is the topic of debate lately, ‘who would you replace him with’ came into the equation.

Keys took the easy route, stating that he thought former Real Madrid manager Zinedine Zidane is the man to take United forward as a team because he feels the current players no longer want to play under Mourinho.

A suggestion we’ve not been able to confirm. Even though things aren’t great, the players are behind Mourinho with perhaps one or two exceptions.

Gray, on the other hand, plays devil’s advocate by claiming he thinks Roberto Martinez is the man Manchester United should look to when replacing Mourinho. The Belgium boss saw his side reach the World Cup semi-finals in the summer, but after a failed tenure at Goodison Park people will question Gray’s suggestion.

Mourinho remains United manager — for how long, nobody truly knows — but we’ve got to back all of the lads now and hope that the boss can find a way around this situation.

As Gary Neville claims, this is the biggest challenge of Mourinho’s managerial career.

If Mourinho goes who should replace him at @ManUtd? Andy Gray's choice stuns @richardajkeys into silence! #beINPL #MUNTOT #MUFC pic.twitter.com/IoqF7d4469