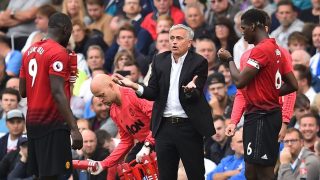 It has been a difficult few months for Manchester United fans and manager Jose Mourinho.

Following the shock defeat at Brighton & Hove Albion a week ago, Mourinho will be desperate to see a reaction from his players against Tottenham Hotspur tonight at Old Trafford.

The season began well for the Reds as they secured a victory over Leicester City in the opening game of the Premier League campaign, but that good work was seemingly undone versus The Seagulls.

As a result, it makes the clash with Spurs an important one for United to get back on track and boost morale, which is much needed at the moment. Especially with defending champions Manchester City dropping points at the weekend after being held to a 1-1 draw with top-flight newcomers Wolves.

Mourinho has seemingly tried to galvanise the club and the fans by praising them for their support since the season began, even during the defeat at Brighton when the latter chanted his name.

Perhaps this is an indirect acknowledgement that he is under pressure and wants as much support as possible – something Mourinho did not get from the board in the summer.

“The supporters were fantastic in both matches. For the team, which is the only thing that matters,” he is quoted as saying by The Daily Star. “I am really happy with the supporters and how they support the team. To be supportive of the team against Brighton, where we didn’t play well and lost the match, it gives you a fantastic feeling.

Listen to our preview of the Spurs match here.