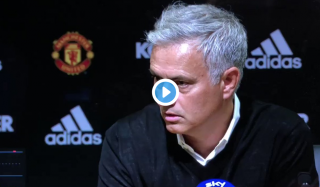 The United manager stormed out of the conference after stating that he has won more Premier League titles (3) than any of the other 19 managers currently in England’s top-flight.

It goes without saying after the start we’ve had that the manager is under increasing pressure. While the vast majority of fans will continue their support of Mourinho, behind it all some questions will need to be asked.

How can United go from looking a different much more convincing side in the first-half to the complete opposite in the second half? Spurs did well to keep us out in the first 30 minutes but grew into the game before scoring three goals after the interval.

The United faithful at large have always got behind the manager – in worse situations than these – and until the club is forced into making a defining decision, that ought to continue.

Behind the scenes and off the record, Mourinho will have different excuses as to why we’re having such a slow start to the season, though publicly he appears more tight-lipped.

Yet he wasn’t all that tight-lipped tonight. Watch the clip below:

Just now, Jose walks out on post match press conference with this… pic.twitter.com/Cb5C9DWYeB