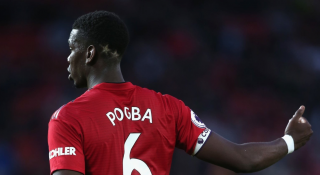 Another defeat for the Reds as the pressure piles on manager Jose Mourinho, but he’s not entirely to blame. Here are our Manchester United player ratings.

Can’t really fault him for any of the goals, though he almost got caught out when one of his kicks brushed off Lucas Moura’s head, but thankfully the Brazilian was too short to take it down.

A bit rusty at times but had the drive United needed going forward. Still better than playing Ashley Young or Matteo Darmian.

Asked to play a role he’s unfamiliar within the heart of defence. Whatever Mourinho asks of Herrera, he does his best and none of his teammates showed that attitude last week against Brighton. Rather refreshing but let’s call a spade a spade. It was a drastic decision to play him there and it backfired, especially for Moura’s goal when he was too slow to the ball.

Ok performance. Dealt with Kane pretty well but Moura took him for a ride at the end to score his brace.

At fault for Kane’s opener. Thought he had the centre-forward covered from a corner scenario, but didn’t even get to compete in the air. Got a nasty kick in the head at the beginning, which saw Moura booked, but he got up quickly and battelled on.

United’s best player. Good all-round performance while keeping United ticking when going forward with his driving runs and awareness in defence. Unfortunately saw the ball go through his legs before Spurs grabbed their second.

The sort of performance you’d expect from a player returning from injury and a World Cup. With more game time, we can expect to see his performance levels increase.

He’d fight his way through a wall to sniff out possession of the ball. Ran the channels when space opened up but worked just as hard to support his fellow midfielders. Didn’t do enough in the second half to warrant a higher rating.

Didn’t do enough to worry Spurs apart from a long-range effort on the brink of half-time, which troubled Lloris. Nowhere near enough urgency in his performance.

He ran and ran and ran. Lingard was non-stop throughout the game in an attempt to put pressure on the Spurs defence. The England international caused a number of individual errors and that looked to be his job in this side. Sadly, nothing really broke for him but A for effort.

Missed a first-half sitter after taking the ball around Lloris.