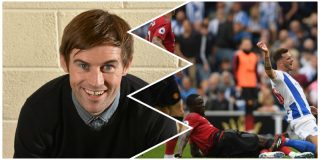 The centre-back’s performance was arguably his worst in a United shirt, though his partner, Victor Lindelof, hardly did himself any favours either. It got worse for Bailly, though, when the Ivorian conceded a penalty as the Reds fell behind their rivals in the title race after just two games.

However, it’s way too early to bring a title race into the equation. Last year’s champions Manchester City dropped points at the weekend after drawing 1-1 with newly promoted side Wolves.

READ MORE: What Mourinho said about Man Utd fans ahead of Tottenham clash

But after the Brighton disappointment, fingers were pointed in Bailly’s direction despite many fans believing he is our best centre-back, albeit when compared against a pretty poor bunch of defenders.

Kevin Kilbane has been paying close attention to the 24-year-old and still believes he needs time to settle in the Premier League.

Yet this will be Bailly’s third season in England…

According to Kilbane, who acknowledges Bailly’s pace, he’s coming up against top strikers (Glenn Murray?!) in England and speed alone just isn’t enough.

“He goes in with two feet every time he tackles,” Kilbane told Newstalk, as per The Mirror. “He runs the risk of yellow cards or giving penalties away.

“He has relied on his pace throughout his career. The ball comes over his shoulders and he can allow the striker to get away from him and still get back.

“The level the strikers are at now, if you let them get away, they’ll get a strike off.”