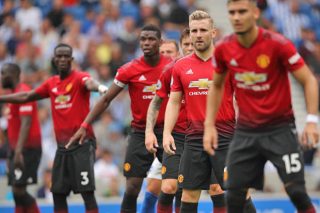 Jose Mourinho is reportedly prepared to bring in Nemanja Matic as part of a back three and seemingly drop Eric Bailly for the clash against Tottenham Hotspur tonight.

United lost 3-2 to Brighton in their last game as they looked unconvincing all over the pitch, especially at the back, with Mourinho now ready to try something drastic in response.

According to the Manchester Evening News, this could involve putting midfielder Matic, who hasn’t played all season due to injury, in a back three alongside Victor Lindelof and Chris Smalling in what already sounds like a risky move.

This could also be a message to United’s executive vice-chairman, Ed Woodward, following claims form The Guardian and others a few weeks back suggesting he vetoed Mourinho’s defensive targets this summer after failing to land Real Madrid’s Raphael Varane.

The MEN claim Mourinho had earmarked Matic as an option at the back in case deals for the likes of Tottenham’s Toby Alderweireld or Leicester City’s Harry Maguire did not come to fruition.

Fans will be looking for Mourinho’s men to respond to last week’s shock defeat. Anything other than that and Mourinho’s future is likely to come into question once again after growing speculation that Zinedine Zidane is keen on the United job, as per Sport 360.