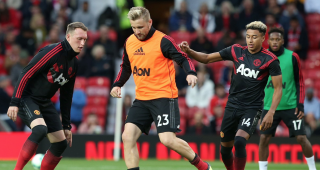 So, Manchester United’s stuttering start to the Premier League season continues with a defeat at home to Tottenham Hotspur.

That means José Mourinho’s men have three points from as many games and are currently six points adrift of Liverpool and Spurs. It’s far from ideal and we need to work our way out of this hole together as a unit.

Two defeats in our first three games? That hasn’t happened since 1992-93 and we went on to be champions that year.

Dreaming aside, here are three points from the game.

There were comparisons at the beginning of the match to Louis van Gaal’s instruction for Phil Jones to take corners when Herrera’s role in the team became more clear. Sat on the right side of a back three, the Spaniard played as a centre-back alongside Chris Smalling and Jones. Like Antonio Valencia, he looked unsure of his responsibilities at times and United paid the price in the second half when he was too slow to the ball as Lucas Moura doubled their lead.

Jesse Lingard grafting to force mistakes but is there enough quality?

We looked a lot quicker in the first-half with Lingard playing off Romelu Lukaku, making runs behind Tottenham’s defence and pressing like never before under Mourinho, and a lot of that was down to this lad. He forced the Spurs defence into making a number of individual errors and his link-up play with teammates was neat throughout. Our urgency levels dropped in the second-half and Lingard’s role looked closed off.

Fred not afraid to have a go

The Brazilian is already proving to be a hit with United fans. Partnered by Nemanja Matic and Paul Pogba in midfield, Fred was allowed to play a more advanced role but he still did some dirty work to help out whenever we weren’t in possession of the ball. He’s a fighter and will probably rack up a few cards as the season progresses, but Mourinho’s main signing from the summer looks a good one.

Rather Luke Shaw than Danny Rose

Where on earth was this Luke Shaw these past few years? That first-half display was his best since the season he picked up that terrible leg break against PSV Eindhoven in the Champions League. Defensively alert and offensively threatening, if Shaw can continue this sort of form he will walk his way back into the England squad.

On other hand, Spurs had Danny Rose, a player Mourinho previously looked at to bring in when Shaw wasn’t looking like the prospect he once was. The United left-back was head and shoulders above Rose, who was the weak link in Spurs’ defence, constantly being overlapped by United’s frontmen.

Some heart on display, at least

The biggest issue I took from our defeat at Brighton was the attitude shown by the players. Zero urgency or care in the world and only a few of the players bothered to acknowledge the travelling fans. When we were 2 down against Spurs tonight, our lads were still contesting every battle and for that reason, my keyboard remains intact.