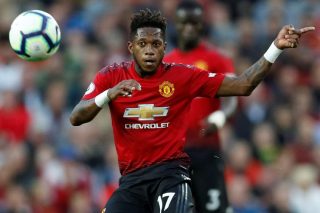 Jose Mourinho looks to have lined-up in a 3-5-2 formation for our Premier League clash with Tottenham Hotspur.

Antonio Valencia (captain), Nemanja Matic and Ander Herrera all return to the side as United look to make it six points from three games.

The defence also consists of Phil Jones and Chris Smalling, who both start their first game of the 2018-19 season. They face a tough ask against a very offensive Spurs side with a perfect record going into the game.

Despite reports of unrest, Paul Pogba keeps his place in the team albeit without the captain’s armband, though that has more to do with Valencia’s return than anything else.

Fans will be keen to see how Fred performs as he looks to settle in quickly to the Premier League. His performance on the opening day of the season against Leicester was a lot more promising than last week versus Brighton when none of the United lads put in a display to be proud of.

Alexis Sanchez features on the bench along with Marcus Rashford, so Mourinho has attacking options available to him if he needs. Anthony Martial does not feature.

Hopefully, tonight we see everyone in a Red shirt work their socks off. The fans do their job, now it’s time for the players to return that support.

The Spurs line-up is as follows. Hugo Lloris captains the side, despite being charged with drink driving on Friday night.

This, we have to say, is stop on from Deputy Editor of Four Four Two, James Maw. Caught Offside take a look at the abuse Spurs are getting online over starting Lloris and giving him the captaincy.

Lloris keeps the captaincy days after being charged with drunk driving at 2am. Rose largely sidelined for a year for giving an actually quite tepid interview. Not a good look, in my opinion.