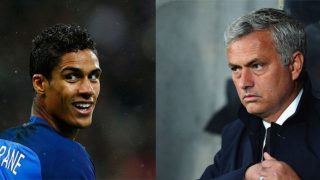 Jose Mourinho has reportedly got in touch with the entourage of Real Madrid defender Raphael Varane to discuss a future transfer.

The France international looks to be surprisingly out of favour at the Bernabeu following the arrival of Julen Lopetegui as the club’s new manager.

That is despite Varane having a successful summer by winning the World Cup after a series of commanding defensive displays.

He is regarded as one of the finest centre-backs in world football, yet it seems Varane has now fallen behind Nacho in the pecking order, and Don Balon reports that Mourinho has moved to try to take advantage.

Mourinho handed United’s executive vice-chairman Ed Woodward a list of targets, but the Glazer puppet was unable to deliver.

Stretty News was also informed that United held talks with Florentino Perez about signing Varane in the summer, and that Woodward was willing to make the Frenchman the first defender to cost north of £100 million.

At the time, Madrid were not interested in selling Varane, but that could change if he continues to find himself out of favour under Lopetegui.