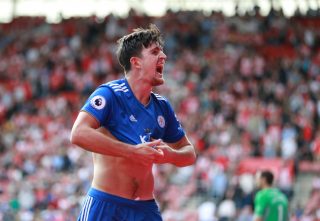 Harry Maguire said he respected the Leicester City’s decision not to sell him during the summer when Manchester United showed interest.

Jose Mourinho wanted to bring the England centre-back to Old Trafford but Leicester refused to part with the 25-year-old.

Stretty News understands an initial attempt to sign Maguire was made before the World Cup, which saw the centre-back’s value rise after a number of solid performances with Gareth Southgate’s England.

The centre-back was not left surprised by the interest and he is now solely focused on Leicester with the transfer window shut.

“I want to be on the pitch, whether it is for someone else or for Leicester,” said Maguire, as per Goal.

“There was always going to be interest over the summer after the team doing so well in Russia but the owners reiterated I was not for sale and I respected their decision.

“They gave me the opportunity to play for this club, such a good club on the rise and I respected their decision. My mind has been fully on Leicester since then.

“I’ve been really impressed since I came back. The people brought in seem to have fitted in really well and I think we’ll only get better.

“I’m an ambitious player and I think we have a really good, talented squad. If we stick together, we can be a real force this year.”

The Foxes have a League Cup fixture coming up before facing Liverpool in the Premier League on September 1. Hopefully, they can put a stop to the Scousers’ current run.