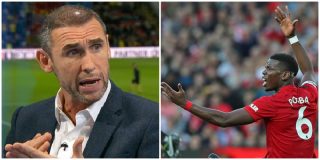 The Reds signed Pogba in a £89 million deal from Serie A giants Juventus in the 2016 summer transfer window.

United made the France international their record signing having sold the player to Juventus in 2012.

The 20-time English champions won the Europa League and the League Cup in Pogba’s first season back at Old Trafford, though last season finished trophy-less before he went on to win the 2018 World Cup with France.

The 25-year-old has struggled with form since joining United, with claims from fans and pundits alike suggesting Pogba doesn’t show enough consistency under manager Jose Mourinho.

Pogba was linked with a move to La Liga champions Barcelona in the summer after his agent Mino Raiola reportedly touted the midfielder around Europe.

Pundit Martin Keown believes United star Pogba needs to get a hold of his agent.

“Pogba’s agent will feel he is only acting in the best interests of his client. Pogba is being criticised and he will want to defend him,” Keown told the Daily Mail.

“But you want someone representing you who will not shoot from the hip whenever they hear something that is not favourable. There needs to be a level of professional dignity.

“Pogba can tell his agent to try to keep a lid on things and not to react.”

The Reds haven’t won the Premier League title since 2013 when Sir Alex Ferguson was still in charge. After finishing 19 points adrift of champions Manchester City in 2017-18, it’s hard to imagine this United side putting up much of a challenge this season.