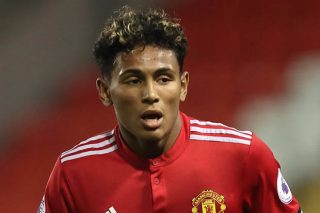 Manchester United full-back Demetri Mitchell is close to rejoining Scottish Premiership side Hearts on a loan deal, according to their manager Craig Levein.

Mitchell spent 4 months at Tynecastle last year, having joined on a loan deal in January. The 21-year-old made a good impression in his 11 appearances at the club, despite Hearts enduring a poor end to the season.

“We’re nearly over the line with Demi,” said Hearts manager Levein, as per Manchester Evening News, after his side beat Kilmarnock on Saturday. Levein had previously labelled Mitchell his best ever loan signing after the player’s successful spell last season.

United manager Jose Mourinho included Mitchell in the pre-season tour of the United states, and he featured in the disappointing 4-1 defeat to Liverpool in Ann Arbour. However, he has not yet played for Ricky Sbragia’s Under 23 side this season having picked up an injury after returning from the first team’s tour.

Mitchell will join fellow United youngsters Matty Willock (St Mirren)  and James Wilson (Aberdeen) in Scotland, who are also out on loan this season.

We would like to wish Mitchell all the best on his loan spell.

Hearts manager Craig Levein says Demetri Mitchell is rejoining on loan. Derby were keen but he suffered an injury earlier this month, which has left little time to arrange a new move. Mitchell yet to play with #mufc U23s but took part in warm-up at Southampton.