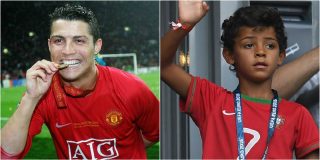 Cristiano Ronaldo has revealed his son, Cristiano Jr, has inherited his competitive streak and hopes to see him follow in his footsteps by becoming a professional footballer.

The eight-year has attracted plenty of attention already with clips of his free-kicks and tricks doing the rounds on social media, shared by his father, showing that the kid has been heavily influenced by the Juventus star’s style.

Imagine Manchester United snapping up Cristiano Jr and seeing him come through the ranks at United. It’s going to be difficult for anyone to speak about the youngster without piling the pressure on, which is totally unfair, but he will be fine as long as he has a third of his father’s confidence.

“He’s very competitive, like me when I was young, and he doesn’t like to lose,” Ronaldo said on his unveiling as DAZN’s Global Ambassador, as per Goal.

“He will be like me I am sure, 100 per cent. I hope that with my experience with my motivation, my goals, I can teach him some stuff, but you know he is going to be whatever he wants.

“I’m always going to support him, but of course I want Cristiano to be a football player because I think he has that drive.

“He has a good body, he’s fast, he has skills, he can shoot, but as you know he’s going to make his decision and he’s so young, I’m not going to pressure him. But that is of course a dream, to see my boy a football player.”

Ronaldo has launched a new chapter of his career by leaving Real Madrid for Serie A champions Juventus. He spent nine years in the Spanish capital after leaving United, where he truly blossomed as a footballer.

Although he has switched clubs, the 33-year-old has held on to his favourite shirt number to preserve his iconic ‘CR7’ branding for marketing purposes and more.

“Of course, you know it’s my favourite number,” he said. “I spoke with the club at the beginning and of course I spoke to Cuadrado because he was No.7. He said: ‘It will be a pleasure for me to give you my No.7, my shirt.’

“So it was good. I’m surprised by the good way [it went] because the club helped me and Cuadrado accepted it very well, so I’m really glad to continue with my No.7.”