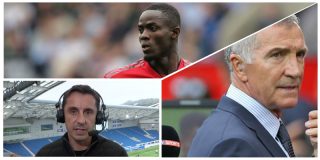 Eric Bailly has hit back at Gary Neville and Graeme Souness’ criticisms of the centre-back over his performance against Brighton & Hove Albion last Sunday.

The defender had a day to forget, as did all of his teammates, looking unsteady throughout while giving away a penalty for a rash challenge, which saw The Seagulls take a 3-1 lead at the Amex Stadium.

While Neville claimed that the centre-back partnership of Bailly and Victor Lindelof is not good enough to win a Premier League title, Souness was unsurprisingly harsher in his comments, saying the 25-year-old was unaware “if he’s in New York or New Year” during the game.

And now, the former Villarreal player have replied to the comments while explaining how he’s done since moving to Manchester United in the summer of 2016.

“I always take criticism well when it is constructive when they are there to help and I actually like criticism but in a positive way,” Bailly told the Daily Mirror.

“But what Graeme Souness said was a little bit disrespectful because it became so personal and it’s not the sort of criticism that can help a young player improve and become a better player.

“I think the criticism was a bit harsh, particularly from people who have played the game and have probably made mistakes themselves during their career.

“It was not just one individual performance on Sunday. It was the whole team that struggled. But it was just one battle lost, not the whole war.

“But it’s one game. We cannot forget that. We shouldn’t just focus on the negative, build on the positive and starting with Tottenham on Monday.

“I think my career has been positive so far. Yes, my second season was difficult because of injuries but you have to remember I was coming from a different championship in Spain.

“You have to remember the Premier League is very difficult, very different and physical. But I think I adapted well and largely my career has been very positive.

“The critics are sometimes good, sometimes bad. But this is my third season and up to now, the critics have always been positive.

“So one piece of negativity will not change my goal and my target which is to become a very good player for Manchester United.

“I’m still smiling because I know what I can do. It doesn’t change anything. Sometimes you can have a bad day, the best thing is not to think about it too much, not to let it affect you and focus on the next game and making a positive response.”

Souness will probably feed on this and begin to obsess over Bailly the same way he does to Paul Pogba, which we can only hope the Ivorian can deal with…

It’s one thing biting back at pundits, but if you continue to make individual errors on the pitch they’re going to crucify you and Bailly doesn’t need that at the moment. He has the ability to be United’s best centre-half and maybe even one of the best in England, though he’s some way from that status yet.

United host Tottenham Hotspur on Monday night and it will be intriguing to see who Jose Mourinho starts at centre-back. Check out our predicted line-up for the game here. We also took a look at three key battles to watch out for, at the match.