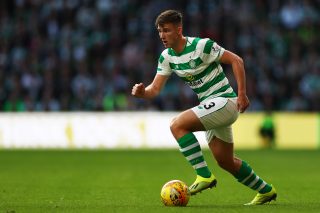 Kieran Tierney is happy to have shunned the “crazy” money on offer at the likes of Manchester United and Everton in order to remain at SPL champions Celtic.

The 21-year-old has registered on the transfer radar of Premier League clubs for some time now, with a breakthrough at Parkhead having been made at the age of 17.

He is now an established starter for Celtic and Scotland, with his efforts having sparked talk of a potential £20 million-plus moves to the English top-flight.

Tierney, who grew up supporting Celtic, has ignored interest being shown in his services. He would prefer to commit to a new contract in Glasgow.

Speaking to the Daily Record, he said: “There was obviously a lot of talk at the start of the transfer window during pre-season, more than before, but for me it’s just about switching off and focusing on Celtic.

“The money being spoken about and what you can earn in England is life-changing. It’s crazy, isn’t it? Absolutely crazy.

“However, the money I am on, for someone at my age, is more than I ever thought I’d earn.

“My life has changed because of Celtic. I have them to thank for everything. I have given them everything, really all my life, and it’s paid off so far. I have enjoyed it.

“At the start of pre-season, that was when people were coming up and asking me what was going to happen. It has died down, nobody is talking about it so much now.

“But if a supporter asks me it doesn’t bother me. I’ll tell them the truth.

Tierney has been heavily reported as a potential solution to fix Manchester United’s problematic left-back situation, though he is showing no signs whatsoever that he is ready to leave Celtic.

Luke Shaw is currently trying to jump ahead of Ashley Young in the left-back pecking order, but his performances must improve drastically if he has hopes of being a starting full-back at Old Trafford for years to come.

The club considered making a move for Juventus left-back Alex Sandro this summer before Jose Mourinho decided to prioritise a centre-half, which executive vice-chairman Ed Woodward failed to deliver.

For now, at least, we’ve just got to make the most of what we have.