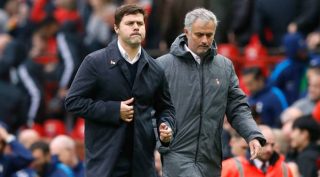 Mauricio Pochettino admits he will still consider offers for Toby Alderweireld but his focus remains ‘taking the best decision to give players game time ‘if they deserve’ it.

The Belgian was heavily linked with a move to United earlier this summer after Jose Mourinho prioritised signing a new centre-back. He gave Ed Woodward a list of alternatives to try sign, including Leicester City’s Harry Maguire, Bayern Munich’s Jerome Boateng and Atletico Madrid’s Diego Godin.

Following the arrivals of Fred, Diogo Dalot and Lee Grant, Mourinho wanted two more players but the club’s executive vice-chairman was unable to deliver, unfairly setting his most important employee up for failure.

Despite already having five centre-backs on his books, Mourinho wanted another defender of high calibre to bolster his defence. A signing like Alderweireld would have brought a degree experience to the back while helping defenders already at the club to progress alongside a more senior figure.

“I am working like if all the players will still be here,” he told reporters when asked about the futures of Alderweireld, Danny Rose and Mousa Dembele.

“I cannot work thinking if they are going to be here tomorrow or not. Not only these names, different names. Can arrive an offer from a different club for number one, number 26, 27, 28 – players that we have.

“Maybe tomorrow or this afternoon arrive an offer, we will consider it. But you are focussed on different names but we are focused in trying and taking the best decision to provide them the opportunity to play if they deserve.”

Mourinho’s mood during today’s press conference wasn’t the best. He responded to most questions bluntly, but stated that he has “no problems” with Woodward, which we don’t believe…

He spoke to the press for four minutes and 19 seconds – much shorter than normal – and said he has not read reports of a falling out between the pair.

“I’m not the right guy to answer.”

When asked if his relationship with Woodward was still fine, he added: “Of course. No problems.”

Again, we don’t buy that either.

Transcript to the rest of Mourinho’s press conference

Q: When Paul Pogba says the attitude in the team is not right, how does it make you feel that you have a brilliant player who can be exceptional one week and the next week, so inconsistent?

JM: Paul has to answer by his words. If you want any explanation about Paul’s words you must get him and ask him.

Q: How do you feel about the way you are playing this season?

Q: What would you like to see against Spurs?

JM: I would like to play well and win.

Q: Have Eric Bailly and Victor Lindelof progressed the way you hoped?

JM: I don’t analyse with you my players.

Q: What about Spurs – how impressed are you with them, Mauricio Pochettino and how they go about their business?

Q: Is the match against Tottenham the right game at the right time?

JM: You have to play against 19 opponents at Old Trafford and 19 away. You have to play against everyone – I don’t know when is the right time, the time is now. The fixtures were decided this way and we have to play Tottenham second match at Old Trafford before we go away, if I’m not wrong twice in a row against Burnley and Watford. This is what it is. Of course it is a difficult match, against a team that last season finished top four, so difficult match.