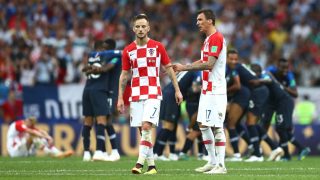 Manchester United reportedly failed in a bid to prise Mario Mandzukic away from Juventus this summer despite Jose Mourinho said to have keen on a swoop.

The Reds were only able to complete three signings this past summer, with Lee Grant, Diogo Dalot and Fred securing moves to Old Trafford, leaving fans underwhelmed not to see a new centre-back or right-sided attacker brought in.

According to Calciomercato, Mourinho wanted to sign Mandzukic in the transfer window with the Croatia international described as ‘first choice’ has continued to impress in Turin while reaching the World Cup final in Russia earlier this summer.

However, as noted by The Independent, Mourinho fell short as Massimiliano Allegri was able to convince his attacking stalwart to remain where is expected to play a key role in Juve’s continued push for domestic dominance and to end their Champions League drought while even potentially signing a new deal.

He will likely face more competition than ever now with Cristiano Ronaldo playing for Juventus following the Portugal international’s switch from Real Madrid, which should have been suggested by United when attempting to sign the player.

Mandzukic’s quality in the final third would benefit United, as would his knack for scoring big goals in big games.