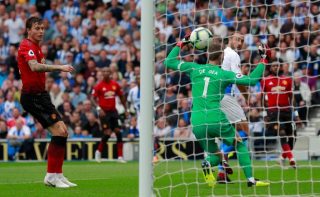 Manchester United face Tottenham Hotspur at Old Trafford on Monday night following their woeful 3-2 defeat to Brighton on Sunday. Jose Mourinho’s side must bounce back with a win against a Spurs team who have won their two opening fixtures of the campaign, including a 3-1 victory over newly-promoted Fulham last weekend.

The Reds are in danger of falling behind the pace of front-runners Manchester City and Liverpool already, so it is crucial they find a way to win. A post-mortem examination took place after the Brighton defeat and left United fans still reeling over shocking defensive performances, as well as the inability to create a clear-cut chance having been two goals down at half-time.

Despite United’s dismal start to the season, there is still reason to be confident on Monday night. Spurs have not won at Old Trafford since 2014, and have only beaten United away on two occasions in the Premier League era. Jose Mourinho will be hoping United’s record over the North London club can continue to relieve pressure on himself and everyone associated with the club following a tough week for United.

READ MORE: The damning stats about Man Utd’s attack and what they tell us

United have been given a double injury boost for Monday’s game; captain Antonio Valencia and Nemanja Matic could both return to the side after taking part in full training this week. Expect Luke Shaw and Andreas Pereira to make way for the two senior players. Pereira was subbed off at half time in United’s defeat to Brighton and Ashley Young’s return could mean Shaw is benched for Monday’s game. Jose Mourinho will most likely stick with a rigid 4-3-3 formation, in a cautious approach against a dangerous attacking Spurs side. Jesse Lingard could start in the most advanced midfield role in the hope to provide more pace to United’s play. He could be joined in midfield by Maraoune Fellaini who may start if Nemanja Matic is not yet back to full match fitness.

Paul Pogba must answer his critics with a more convincing performance on Monday. Pogba was nothing short of pathetic on and off the ball last week but will retain his place. Alexis Sanchez still remains a doubt having not travelled with the squad to face Brighton on Sunday through injury. If Sanchez is not fit, Anthony Martial will be given another chance to impress in a game where he scored a late winner last year. Mourinho is likely to set up to hit Tottenham on the break, and the pace of Martial could be crucial in getting in behind the Spurs defence.

Tottenham, however, will also be confident be confident going into Monday’s clash. Mauricio Pochettinho is likely to set up in his preferred 3-5-2 formation, with Ben Davies and Kieran Trippier providing the width. Spurs’ wingbacks like to remain high up the pitch which could cause problems for United, with widemen Juan Mata and Anthony Martial not known for their ability to track back.

Dele Alli and Christian Eriksen should also cause problems for United’s shaky defence and will look to provide for star striker Harry Kane, who broke his August goal curse last week and will be keen to add to his total against Mourinho’s men.

Jose Mourinho has had many negative things written about him this week, but what you cannot deny is his exceptional record against top six sides. The United boss will set up his side in a way that can grind out a result against Tottenham on Monday, and a win is all that matters this time out.