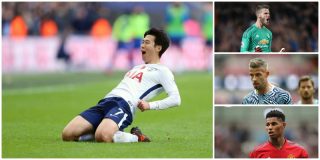 I will be taking a look at combined line-up’s for each of our big games this season and since Tottenham are one of our top-four contenders, Mauricio Pochetino’s men certainly fall into that bracket.

It should tell us how United stand when compared to domestic rivals.

Starting with Spurs, a side that boasts a number of high-quality players, but rarely spends big in the transfer market, I will go through each position with my own verdict.

Hugo Lloris has come back from the World Cup in Russia with a shiny gold medal in his pocket, the world in his gloves, so I don’t want to totally dismiss him here. The Frenchman is a quality goalkeeper and without question one of the best the Premier League has to offer, but on a world football scale, he doesn’t quite compare to De Gea.

In contrast to Lloris’s historic World Cup campaign, which saw France lift the trophy for the second time, De Gea had a nightmare and has yet to keep a clean sheet this season. I don’t see enough to suggest De Gea has gone backwards, but instead suffer from a shortage of confidence, which I’m sure we will be addressed.

Unlike Antonio Valencia, Trippier is playing in his natural position and continues to get better and better. The England international has had a stunning start to the season too, continuing his form from the World Cup, and already has a goal to his name. He’s most dangerous when hugging the touchline with space to run into before delivering that tempting cross for a teammate.

A Spurs double. It’s not as if I’ve been given much to work with and I’m sure Mourinho said something similar to Ed Woodward ahead of the new season. Eric Bailly and Victor Lindelof are two promising defenders, but other than that we haven’t got much going for us defensively. Davinson Sanchez is another Spurs defender I like the look of, though he does seem rash like Bailly.

Sad state of affairs for both sides that Young takes up the left-back slot. I’ve yet to be convinced by Luke Shaw – a separate topic for another day – but Youngy had a decent season last year and performed very well under Gareth Southgate at the World Cup. Fully expect him to take his position from Shaw in the coming weeks.

I have said it before and I’ll say it again. I never wanted Eric Dier at United and was delighted when we opted to sign Matic instead. The Serb was such a crucial player to Mourinho’s side last season, he hardly got a rest, and this season will get worse for us unless he returns the fold. Alli gets the nod over Paul Pogba because he’s equally effective but more consistent. Finally, Eriksen walks into this side.

Usually plays on left, but I’ve decided to shoehorn Rashford into this line-up because he needs to be playing regularly to reach his potential. Neither side has anything really going for them on the right, though, and Rashford can make things happen if in the right state of mind. This is an attacking side after all.

While Kane has a higher Premier League goalscoring ratio (0.71) to Lukaku (0.46), I believe that has a lot to do with the teams they’re playing in. Pochettino also takes a totally different approach to Mourinho, who is far from conservative in his ways, and it’s clear to see the Belgian doesn’t get as much support from his teammates as Kane. Kane also tends to rack up more goals because he’s Tottenham’s primary penalty taker.

This will probably upset Spurs, but I don’t see a lot between these two superb goal scorers, both at the top of their game. Lukaku has improved significantly since leaving Everton for United a year ago and if he keeps developing in such a way, the Reds will have potentially the best striker in the world on their hands.

Even as a Red, I can’t help but admire this lad. Pochettino had to convince him to stay at Spurs rather than seek first-team football elsewhere after a difficult first season and was rewarded as the South Korean grew impressively into the English game.

In many ways, Son is the perfect counter-attack player. His explosive pace and positional sense are his greatest strengths. He’s always able to find space to play, his close control and clinical finishing make him deadly, and he fits this Spurs side like no other.

Unfortunately for the Reds, Alexis Sanchez has yet to put an argument forward in a United shirt and Anthony Martial has gone backwards since his debut season.