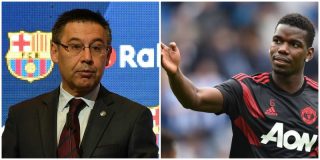 Barcelona chiefs have reportedly held discussions ahead of deciding to launch a transfer bid for Paul Pogba in the next seven days.

The La Liga champions’ president Josep Bartomeu is described as ‘obsessed’ with signing Pogba after holding what is described as a ‘secret’ meeting by Spanish media outlet Don Balon.

Barcelona don’t have long to get a deal for Pogba done as the transfer deadline for La Liga clubs is next week, but Don Balon give them hope of getting something done as the player himself is claimed to be eager to escape Jose Mourinho at Old Trafford.

While it’s clear to see Pogba would be happier elsewhere, or under a different manager, his attitude has come under question from supporters frustrated having not seen him at his best in a United shirt.

What happens if United replace Mourinho and Pogba throws another tantrum? Should the club even bother consulting the likes of Pogba about incoming managers? I say no, as player power appears already to be a concern within the club.

I, for one, don’t think anyone comes out of this well: Mourinho, Ed Woodward, the Glazers or the players. They all shame part of the blame and nobody is perfect, but as fans, we must hope the manager can get back to his best and turn everything around.

It’s been a tough start to the season for United with a defeat to Brighton last Sunday.

Moreover, with the transfer window now closed for English clubs, it seems highly unlikely United would let Pogba go now as they would have to wait until January to replace him. Woodward is not going to bow down to Barcelona this late and will want to make the club strong in a negotiation sense to get the best deal possible for Pogba, should he leave in the future.