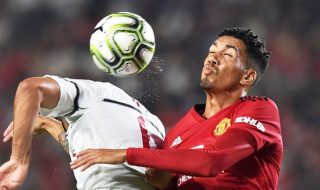 Manchester United face Tottenham Hotspur on Monday night at Old Trafford. The Reds suffered an unexpected defeat against Brighton & Hove Albion in their second game of the season they the aim must be to bounce back from it straight away.

Spurs, on the other hand, have won both of their opening fixtures and will want their 100% record to continue with a win away to United.

Former Arsenal talisman Alexis Sanchez suffered a minor knock in training before the Brighton game but could return in time to face Spurs since he’s been working with the team all week. Meanwhile, Antonio Valencia and Nemanja Matic should be available for selection.

De Gea conceded 3 goals at the Amex Stadium and will be looking to secure his first clean sheet of the season. Not that it will be easy with Harry Kane, Delle Alli and Christian Eriksen lurking around the place, the United defence must avoid individual mistakes and close away opening gaps that may occur when Spurs have possession. With Valencia back in training, I think he will come in for Ashley Young, while Smalling has a good enough record up against Kane to stand in for Victor Lindelof. Bailly keeps his place.

The midfield battle is going to be tough. And, with that in mind, I was hesitant to pick Pogba due to his admission about having a bad attitude during the Brighton game. Leave him at home if he can’t be arsed. Moreover, Matic might come in to add some cover to our defence with Andreas Pereira being pulled off at half-time last weekend. The Belgian born midfielder should be an option from the bench for this fixture, with Fred getting another chance to make an impression on English football.

Martial has been dropped from my starting eleven for this game. After a summer of uncertainty, to perform in such a way against Brighton was a disgrace and it’s not the first time the Frenchman hasn’t look arsed in a United shirt. For that reason, I’d like Sanchez to return or even Marcus Rashford given the nod to play from the left with Jesse Lingard on the right, both offering support to the centrepiece Romelu Lukaku.

Let us know below in the comments section if you would make any changes to this predicted line-up to face Spurs.