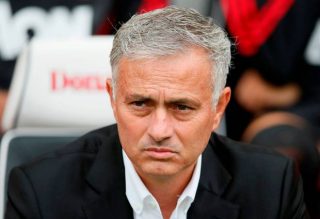 According to a detailed report by Sky Sports, Manchester United have spent less time in the opposition’s final third than any other Premier League club this season.

While United are just two games into the new season, it would be crazy to ignore such a telling statistic given how underwhelming the team has looked going forward under manager Jose Mourinho, who is renowned as a conservative coach.

Even the amount of touches United have had in the opposition’s box (25) from the opening two games is ranked 18th when compared against the other 20 Premier League sides and one can only wonder how many goals Romelu Lukaku would end up scoring if the Reds were more pro-active in possession.

As for possession, Mourinho’s men have clocked up an average of 55% which compares much better than the rest of the statistic outlined, ranking at 6th against our domestic rivals. Though time spent in the opponent’s final third is at a low 20%.

Does this suggest we’re doomed as the season goes on? Not at all, but the shockingly bad performance against Brighton last weekend has taken a toll on the stats discovered by Sky Sports.

Hopefully, on Monday, against Spurs, whatever team Mourinho fields can attack convincingly and space is bridged between our midfield and Lukaku. These statistics back up my belief that the frontman should be getting more support than he has previously, yet with such an inconsistent back four it’s understandable if the boss wants to provide the defence with more cover.

Why, oh why did Ed Woodward not listen to Mourinho when asked to sign a commanding centre-half?

Manchester United have spent less time in the opposition’s final third than any other Premier League club this season.

We take a closer look at the stats behind their attacking problems: https://t.co/0x0k6RpA78 pic.twitter.com/zTZbDy7zJt