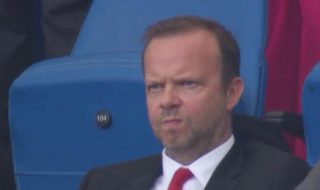 The David Moyes era all over again? No, thankfully not.

Fans are reportedly planning to fly a banner from a plane calling for Ed Woodward’s head at Old Trafford when they face Burnley next weekend.

The Reds have endured a tricky start to the 2018-19 season. On the opening day of the season, an underwhelming win over Leicester City saw us take all three points, though the following week was met with a shock 3-2 defeat to Brighton & Hove Albion.

According to the Daily Mail, the target of fans’ anger is the board, with Woodward set to be targeted on their banner, as well as the Glazer family.

The Glazers have not changed much since the 2005 takeover. They’re still the same bunch of parasites with the leading member, Malcolm Glazer, who died in 2014, as per The Independent.

And, it’s fair of us to demand more from our owners, who have never even opened a dialogue with the club’s supporters.

As a result of a poor summer transfer window, United look weak in a number of key areas. With no new central defenders brought in, meaning Mourinho must do with what he has (which isn’t much, quality wise) …