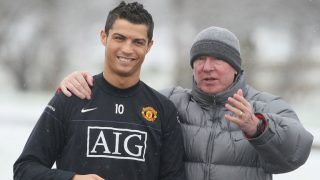 Cristiano Ronaldo has spoken of Sir Alex Ferguson’s huge influence on his career, insisting he was “taught everything” by his former Manchester United manager.

The 33-year-old has recently joined Juventus, the third move of his career, in a deal worth £99 million.

He made his Serie A debut in a dramatic 3-2 win against Chievo and did everything but score a goal for the Bianconeri.

It has been clear for some time that Ronaldo and Ferguson have always had a special bond, almost like father and son, and the former United and Real Madrid forward has spoken of his appreciated for the 76-year-old’s guidance.

“Of course, in the beginning of my career he was so important to me because I moved from Sporting to Manchester and I had that Portuguese mentality – too many stepovers, decision-making was not the best,” Ronaldo said, as per the Evening Standard.

“So he taught me how to do it. You know, in the Premier League they don’t fall over so easy, they are tough.

“As I’ve said many, many times, he taught me everything. He was like a father to me. He helped me a lot at Manchester United.”

The Portugal international has never hidden his admiration for Ferguson and you could say the same about the Scot when it comes to talking about Ronaldo. They have a great relationship and it’s always nice to hear one of them talk about the other.

Ronaldo do due to make his debut for Juventus on Saturday when Massimiliano Allegri’s men prepare to face Lazio. That’s definitely a catch worth watching.