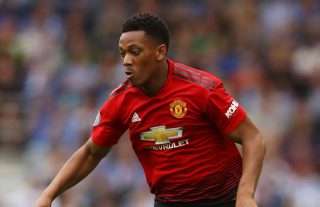 Manchester United striker Anthony Martial wants to stay at the club and fight for a place in Jose Mourinho’s starting eleven this season.

If his performance against Brighton & Hove Albion is anything to go by, Martial wouldn’t fight his way out of a paper bag.

According to The Sun, the French international’s agent stated in the summer that Martial was seeking a move away from Old Trafford but they also report that he has now had a change in heart and wants to fight for his place in the side.

The Frenchman signed for the Reds from AS Monaco in 2015 for £36 million, as per BBC Sport, and he has gone on to appear 166 times for the club to date. The 22-year-old has also managed to score 36 goals during that time, developing a strong reputation as a clinical finisher with terrific acceleration before he bursts into a sprint.

The past two seasons, however, have been difficult for Martial under manager Jose Mourinho. He has only managed to feature twice in United’s last 10 games, which some will claim cost him a place in France’s World Cup squad.

Les Blues went on to win this summer’s World Cup, while Martial was away on holiday, undoubtedly wishing he was in Russia with fellow France internationals.

There has never been any doubt about the talent that Martial possesses, but in recent times he has appeared to be at odds with Mourinho, who often favours the likes of Alexis Sanchez, Marcus Rashford and Romelu Lukaku for inclusion over him.

Martial played 60 minutes of United’s 3-2 defeat away at Brighton on Sunday and didn’t cover himself in glory with his performance, leaving a number of the travelling support annoyed by his attitude shown on the pitch. For some, it didn’t look like he wanted to be there or fight for the cause.