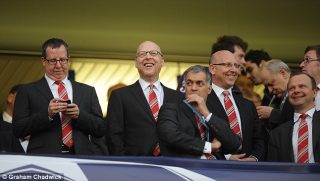 No marquee signing, the star player wants out, the manager is no longer being backed by the board and the team have made a stuttering start to the Premier League season.

A sad reality for any football fan.

The club’s share price has hit a new record on the New York Stock Exchange; since the end of July to just after Sunday’s shock defeat against Brighton & Hove Albion, shares have gone up nearly 14% to $24 (£18.50).

That means the club’s overall value is at a record $4 billion (£3.1 billion).

This takes priority over on-field success for Woodward and the parasites, who, despite recently handing Jose Mourinho a new contract, refused to back the manager in the transfer market.

On Monday, club legend Gary Neville said on Sky’s Monday Night Football: ‘If Ed Woodward was going to doubt Jose Mourinho, then the time to be doubting him was last January.

‘The minute he gave Jose Mourinho a contract extension — which some would say was unnecessary part-way through a season — he had to then buy him the centre-backs. It’s been messy these last couple of weeks.’

But at least off the pitch, Woodward’s work continues to reap rewards. The Glazer puppet does his bit commercially to attract new sponsors and receives a delicate path on the back for his efforts. ‘Good boy, Dick’Ed.’

Fantastic news. Can we pull out of the @premierleague this season to focus more on ways to line the Glazer’s pockets? The football is only a distraction anyway. #DickEd https://t.co/fqMqL0oSlm

What’s more is United have a 10-year kit deal with Adidas worth £1 billion and launched an app earlier this month.

As long as the commercial cow is still milking revenue, these suits ruining our football club are going nowhere.