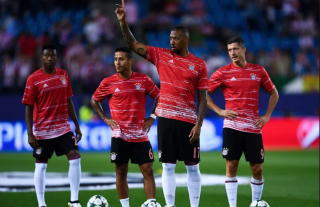 Bayern Munich striker Robert Lewandowski has finally opened up about why he was determined to leave the Bundesliga champions this summer.

The Poland international, who had a dire World Cup in Russia, was apparently keen on a fresh challenge, with both Manchester United and Chelsea linked with a move, as well as European champions Real Madrid.

Lewandowski’s agent, Pini Zahavi, confirmed that an exit was possible this summer after spending four years in Bavaria.

Speaking to Sport Bild, as per Football 365, he said: “Robert feels he needs a change and a new challenge in his career. The managers of Bayern know about it.

“Robert’s motives are not money or to join a specific club.”

Not for one minute this summer did we believe there was anything in this story concerning United. Last year, Jose Mourinho bolstered his attack by spending big on Romelu Lukaku and after a strong debut season, why would we be looking to sign Lewandowski?

If executive vice-chairman Ed Woodward wasn’t able to work on deals to sign a new centre-back, which United desperately need, is it realistic to claim he’d have captured a luxury signing like the Bayern striker? I certainly wouldn’t think so, though it’s a marquee signing he would be dead proud to add to his list of expensive mercenaries that has joined the club since he took charge following David Gill’s departure.

The striker has now revealed all about his motives to force a move from the Bundesliga giants.

“In April and May, everyone criticised me. And I felt no protection from the club, I felt alone,” he admitted.

“I scored no goals in two or three important games and suddenly everyone was saying: ‘Open fire against Lewandowski!’ I did not see anyone who supported me at the time. Neither of the club bosses defended me. I did not feel good in Munich at that moment. Being at Bayern did not fit for me at that time.

“I noticed that in Munich the fans support me. I realised that they still want me here. I will never strike, never mess with the club. I’m not wasting any thought on another club now.”

Reading those quotes only strengthens my view on such a signing.

Yes. Lewandowski is one of the best strikers in world football, but how soft does he sound whinging over a slight duck in form and some criticism. United players learn to deal with it or get binned. It’s part and parcel of playing with a big club.

And, this United side in particular needs leaders.