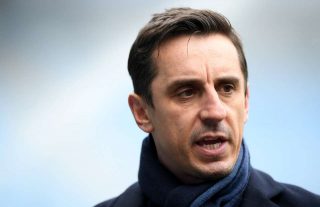 Gary Neville has received inside information from Manchester United on what the spirit is really like in the dressing room.

There have been increasing reports about the mood at United being somewhat dour and that Jose Mourinho has lost his players following his fall out with Paul Pogba.

The Reds were also recently beaten by Brighton in their second game of the new Premier League campaign, losing 3-2 at the Amex on Sunday.

But despite all the negatives, Neville claims that a source at the club has informed him the spirit inside the dressing room is positive.

“I speak to people at the club and I think that there is a good spirit in the dressing room. Today [Sunday] is a poor performance,” he said on the Gary Neville podcast.

“That will be the wedge that will be tried to be driven and I have felt it being forced a little bit with the Pogba issue this week. They’re trying to force this issue.

“I think he will leave the players because what he needs now is get them right for a week on Monday, a big game against Tottenham, and it is only the second game of the season.

“It’s a worry but it’s only the second game of the season so it’s not terminal.”

People will also make a mountain out of a molehill when it comes to United. They’re the same people who want to see the club fail and, more specifically, Mourinho at this point in time.

Unlike ex-Liverpool striker, John Aldridge, Neville has linked within United and speaks with authority. The former Republic of Ireland international has bizarrely claimed Mourinho is trying to get sacked at United in a piece for the Irish Independent.

Foreign managers tend to be introduced to English football with a degree of protection from the press and Mourinho was no different when he had journalists drooling with his ‘special one’ comments.

It’s going to be a long season but we’ll be alright if Mourinho can start getting the best out of his players.