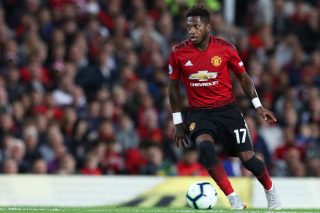 Fred has praised the role of former Arsenal midfielder Gilberto Silva played in securing his summer move to Manchester United.

The Brazil international sealed a £47 million transfer to the club from Shakhtar Donetsk in June, and he has revealed his agent Gilberto was key to his decision.

Fred, speaking about Gilberto, who was involved in some major clashes with United between 2003 and 2008, told the official website: “Gilberto was a top midfielder who played for Arsenal. But he has a lot of respect for Manchester United, who are obviously a big club here in England.

“He praised the club a lot and after he was granted the opportunity to speak to Jose Mourinho and other senior figures at United, we made the decision together for me to come here. We decided it would be a good move for me.”

Fred got his first taste of Premier League football in a win over Leicester City but was faced with a shock defeat against Brighton on Sunday.

The midfielder has also received advice from his agent on adapting to football in England, although a lot has changed since Gilberto played for the Gunners.

“Gilberto is a top guy and his advice means a lot to me,” Fred added. “He played in the same position as I do and he won the Premier League, so I look to him for inspiration, I like to what he has to say and I take on board what he tells me.”

I know its early days, but Fred already looks an exciting acquisition. His performance against Brighton may have been below part, like the rest of his teammates last Sunday, though early signs tell us he’s going to be an important part of this side going forward.

Hopefully, against Spurs on Monday night, Fred can give us another glimpse of his best traits and help United get another win under our belt.