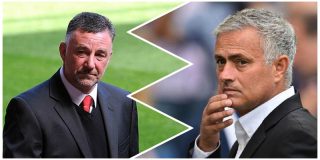 Jose Mourinho is trying to get himself sacked at Manchester United, according to former Liverpool striker John Aldridge.

The Reds suffered a shock 3-2 defeat to Brighton & Hove Albion on Sunday afternoon to put some early pressure on the manager’s shoulders.

Not as if there wasn’t enough pressure on Mourinho, with the board refusing to back the manager after United finished 19 points adrift of Premier League champions Manchester City last season. Even executive vice-chairman, Ed Woodward, should admit more could have been done to strengthen the squad this past summer.

Mourinho, who embarks on his third season with the Reds, still looks to build on our second-place finish in the Premier League last season, when United also reached the FA Cup final before losing the final to Chelsea in Antonio Conte’s last game in charge of the Stamford Bridge club.

With Paul Pogba already causing issues between the manager and himself, cracks are already starting to appear.

This leads to a rather bizarre view from Aldridge, who made 83 league appearances for Liverpool, expressing that Mourinho could learn a thing or two from Jurgen Klopp if he wants to improve morale inside the dressing room.

“The only conclusion I can come to as I watch the Jose Mourinho meltdown at Manchester United is that he is trying to get sacked once again,” Aldridge told the Irish Independent.

“It is bizarre to see history repeating itself three years after he was shown the door at Chelsea after he alienated the dressing room and left the cub with no choice other than to get rid of him.

“The Chelsea players refused to play for Mourinho in the end and while it is unacceptable for any footballer to down tools and refuse to give of his best, you can understand why this particular manager is hard to play for.

“I look at Jurgen Klopp at Liverpool and while he has not won the trophies Mourinho has collected over the course of his career, he has a wonderful way of getting players on side and presenting his club in a good light.

“Mourinho seems to be precisely the opposite, as he criticises his players in public and looks grumpy and miserable most times we see him in front of a camera.

“This guy seems to go out of his way to inject poison in his dressing room and whatever his motives, he is not getting the reaction from players anymore.”

Pogba aside, we’re not hearing any whispers of unrest in the United dressing room. Unless Aldridge has heard otherwise, which we seriously question, his argument doesn’t really stand.

Mourinho wouldn’t swap his managerial success for Klopp’s charisma. No way. Why the fuck would he?

I’d much rather be an arse whilst winning than a nice guy whilst losing.